The twinning program between the Lasallian Region of North America (RELAN) and the Lwanga District of Africa celebrated its 20th anniversary during the 2014-2015 academic year. The initiative, which started at the request of the Institute, pairs schools in RELAN with ministries in the Lwanga District of Africa. The goal of twinning is to promote relationships as well as financially support ministries in Africa. While some RELAN schools host twinning education and fundraising efforts throughout the year, Lent is a traditional time of increased efforts.

Here are some of the ways schools in RELAN supported their twin schools:

Bishop Loughlin Memorial High School, Brooklyn, New York: The school hosted its annual Penny Wars, which splits students and staff into separate teams that compete to see who can earn the most points by adding pennies to their respective team jar. If the opposing team puts dollar bills into the jars, points are subtracted from the total. All money raised benefits St. Mary’s Boys Secondary School in Nyeri, Kenya.

Calvert Hall College High School, Baltimore, Maryland: Calvert Hall’s efforts to support Mount La Salle College in Naka, Nigeria, began with a presentation by Marc Parisi, director of communications and marketing, who traveled to Kenya in 2014 with the District of Eastern North America’s Twinning Summit. For the following two weeks, students collected donations in homeroom each day. They ended the fundraising effort with change collection jars in the dining hall and a raffle for junior and senior prom tickets.

The De La Salle School, Freeport, New York: In addition to raising donations for Mwangaza College in Nakuru, Kenya, students and faculty also interacted with representatives from the ministry over Skype.

De Marillac Academy, San Francisco, California: Fifth graders wrote essays to raise money for Child Discovery Centre in Nakuru, Kenya. They set up on a street corner near their school known for drug activity and violence, and used their essays to convince people to donate. Additionally, the student council organized a fundraiser called the Cha-Ching Challenge to raise money.

DeLaSalle High School, Minneapolis, Minnesota: Students donated to take part in dress down days with one-third of the donations going to Mwangaza College in Nakuru, Kenya. Additionally, a teacher organized a staff trivia night, which drew 42 participants. DeLaSalle hopes to double that number next year and is considering a student trivia event as part of next year’s efforts.

La Salle Academy, Providence, Rhode Island: Students and faculty both took part in fundraising activities to benefit Rongai Agricultural and Technical Secondary School in Rongai, Kenya. Students gave donations as part of dress down days, and faculty paid for a soup and bread lunch every Wednesday during Lent, which featured homemade soup donated by staff members.

La Salle Catholic College Preparatory, Milwaukie, Oregon: Students raised money throughout Lent with weekly challenges to benefit Mwangaza College in Nakuru, Kenya. At the end of the fundraiser, as a reward, students camped out on campus with Principal Andy Kuffner.

La Salle High School, Pasadena, California: The school used a contest, called Mentor Mania, to raise money for Mount La Salle College in Naka, Nigeria. Each student was part of a grade-level mentor program that met twice a week, which was when the groups collected donations as they competed to win a pizza lunch. On the last day of Mentor Mania, all students gathered to watch a final count of donations to determine the winning group.

Mullen High School, Denver, Colorado: Mullen’s main focus of its Lasallian Heritage Week was solidarity with St. John Baptist de La Salle School in Addis Ababa, Ethiopia. The celebration incorporated the colors of the Ethiopian flag, including students dressing in the colors and forming a star. The school also recorded the week’s activities and sent a copy to its twin school. On one day, all classes stopped so students could watch the twinning video Christian Brothers Conference created. Throughout the year, students held collections for twinning, raised money through peace shirts sales, competed in Penny Wars, and donated a portion of proceeds from a free trade coffee fundraiser. 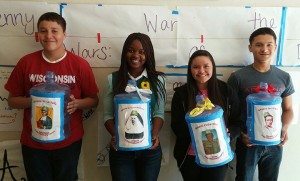 San Miguel High School, Tucson, Arizona: Twinning efforts started with a presentation from Abel Gutierrez from Cathedral High School in Los Angeles, California, who traveled to Kenya in 2014 with the District of Eastern North America’s Twinning Summit. The school raised money through its annual Penny Wars campaign. This year, each class, representing one of the holy men and women important to them as Lasallians and southern Arizonans, entered into “battle” to benefit of Child Discovery Centre in Nakuru, Kenya.

Saint Mary’s College High School, Berkeley, California: Inspired by what he learned about St. Mary’s Boys Secondary School in Nyeri, Kenya, one student donated some of his summer earnings to the Nyeri school. He also initiated contact with the school and is now exchanging letters with one of the students.