The second day of the General Chapter concluded with a keynote address by Superior General Brother Álvaro Rodríguez Echeverría, FSC. He shared his experience and the experience of the Institute through his eyes from the past 21 years, seven of which were as the Vicar General and 14 as the Superior General. 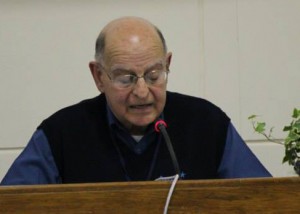 In his presentation, Brother Álvaro reminded us how important prayer is for us Brothers – and all Lasallians – serving the Lasallian mission today. A prayer life rooted in the Scriptures and the words and actions of Jesus are essential for ensuring the future of the Lasallian mission. A prayer life and a spirituality based on the Gospel is the foundation for creatively responding to the needs of the world today. Echoing Pope Francis’ word in his Apostolic Exhortation, The Joy of the Gospel, Brother Álvaro stated that educational innovation and creativity have been a hallmark of the Lasallian legacy. “An Institute,” said Brother Álvaro, “should be creative and always seeking new paths.” He challenges us to continue efforts that make our education accessible to the poor. He urges us to continue to be as creative as the first Brothers in meeting today’s needs, both within the school setting and new ventures beyond the school. He invites us to continue supporting the lay vocation in the church and in the world helping men and women discover and live their own Gospel vocation inspired by the Lasallian charism.

Brother Álvaro expressed his happiness that three recent international Lasallian gatherings spoke to their desire to respond to our charism, the education service of the poor. Delegates to the 2013 International Mission Assembly said, “The educator and the community of educators must welcome those who are vulnerable.” The 2013 Young Brothers Assembly in the Philippines said, “We dream that our association for the educational service of the poor may be deeply rooted in the Gospel in such a way that the mission will continue to respond to the needs of the young, especially the poor.” Our young Lasallians at the 2014 International Symposium said, “We are impassioned by being active in the Lasallian educational mission, especially through service with the poor.” Brother Álvaro noted they did not say “of the poor” but “with the poor,” meaning service not from above but alongside the poor, mutually giving and receiving, teaching and learning. 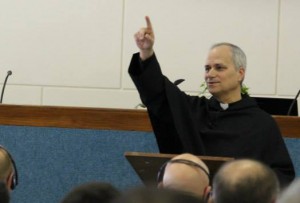 Today (Thursday, April 24) we begin a three-day retreat seeking the Spirit’s guidance and the Lord’s will for the Institute today. Facilitating the retreat is Father Robert Prevost, most recently the Superior of the Augustinians. At the end of the opening session, the Visitor of France announced a gift from his District to all the delegates. It is a book about St. La Salle’s experience in Parmenie, most appropriate given the theme of our General Chapter. The book’s title is The Rendez-vous on the Hill by Brother Jean-Louis Schneider, FSC, one of our Lasallian scholars.