45th General Chapter: It is Also Our Work

The theme of the 45th General Chapter – “This work is the Lord’s and it is also our work” – comes from a 1714 letter of the principal Brothers in Paris to Saint La Salle while he was in the south of France at a place called Parmenie. De La Salle had gone to Parmenie in the French Alps near the city of Grenoble because of some troubles in Paris that he believed he may have caused.  He thought it might be better to separate himself from the work of the Brothers there. 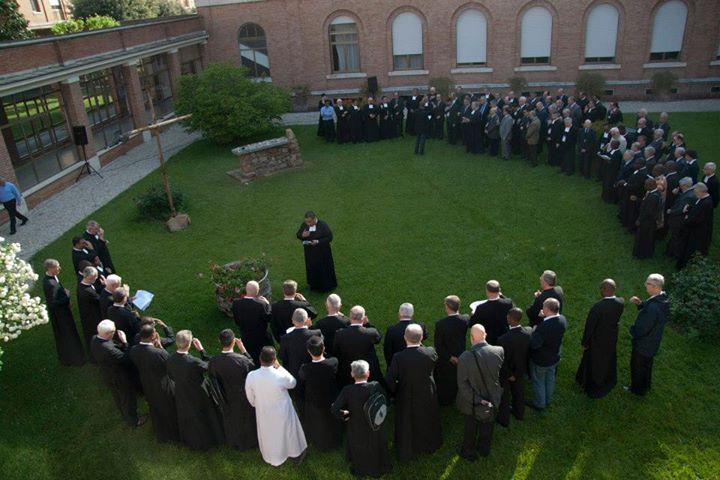 This 300th anniversary of De La Salle’s experience at Parmenie and the call of these Brothers for him to return to Paris and once again take up leadership of the fledgling Institute is serving as our inspiration for the hopes of the Chapter.  Just as those first Brothers reminded De La Salle that this new work of Christian education for the poor and the young was his as well as theirs, we too – all Lasallians – are reminded that the work of the Lord is also our ministry. With this in mind, at 9:00 a.m. on the first day of the Chapter, the Brother delegates gathered in the courtyard behind the main building of the motherhouse for our opening prayer before a replica of the stone altar and cross that still exists at Parmenie.

Following prayer, the delegates proceeded to the Chapter meeting hall – called the Aula Magna – for the formal opening of the Chapter. The opening began with the singing of Veni Sancte Spiritus, invoking the Holy Spirit to be with us throughout the deliberations of the Chapter. The opening morning session consisted of a welcome, a brief presentation by the Superior General, Brother Álvaro, and each Brother receiving his “obedience” – an official document certifying him as a member of the General Chapter. The rest of the day was devoted to ice-breaking activities to help build a sense of community among the delegates coming from around the world and some procedural matters. The day ended with a liturgy presided by Cardinal Joao Braz de Aviz from Brazil and who heads the Vatican office for Congregations of Religious Life.