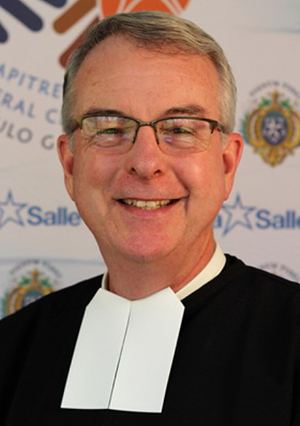 Brother Timothy Coldwell, FSC, was elected today, May 22, as General Councilor with specific responsibility for the Lasallian Region of North America (RELAN).

“I am humbled beyond words by the commission I have received from the Brothers of the 45th General Chapter to serve as General Councilor,” said Brother Tim. “I hope that in some small way I can contribute to the spirit of this Institute and share the zeal of this global family. It will be an honor to work closely with everyone in the Lasallian Region of North America.”

Prior to being elected General Councilor, Brother Timothy served as Visitor of the District of New Orleans – Santa Fe for seven years. In 2014, Brother Timothy marks his 43rd year of association with the Lasallian mission, beginning with his days as a student at Archbishop Rummel High School in Metairie, LA. The native of Denver, CO, entered the novitiate in 1979 in Ontario, Canada, and made his final vows in 1986. His prior assignments and duties have included service as teacher, dorm prefect, soccer coach, and administrator at San Miguel High School in Tucson, AZ; St. Paul’s School in Covington, LA; Notre Dame High School in Shreveport, LA; and St. Alphonsus in New Orleans, LA.

In addition to serving on the Regional Conference of Christian Brothers (RCCB), Brother Timothy’s other Lasallian leadership experiences and contributions over the years have included participating in numerous Regional and international Lasallian programs, serving in District ministry as Vocation Director, and serving in Institute ministry as Secretary for Formation.

Along with Brother Timothy elected with responsibility for RELAN, the following Brothers were also elected: