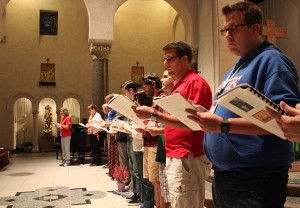 Praying for the District of San Francisco New Orleans

Officially welcomed into the Lasallian Region of North America (RELAN) on July 1, 2014, the District of San Francisco New Orleans (SFNO) was greeted with prayers and well wishes from Lasallians, including a special lunch and prayer celebrated by participants at the Buttimer Institute of Lasallian Studies. The formation program is taking place at Saint Mary’s College of California in Moraga, CA, June 29 – July 12, 2014.

On Tuesday, July 1, Brother Donald Johanson, FSC, Visitor of the new District, spoke and spent time with Buttimer participants at a lunch in celebration of SFNO. Buttimer participants and staff from both historic Districts of San Francisco and New Orleans – Santa Fe joined together in a special prayer for the new District that was created by two members of the SFNO Leadership Team: Charles Legendre, AFSC, Director, Office of Education – Covington, and Brother James Joost, Auxiliary Visitor of SFNO.