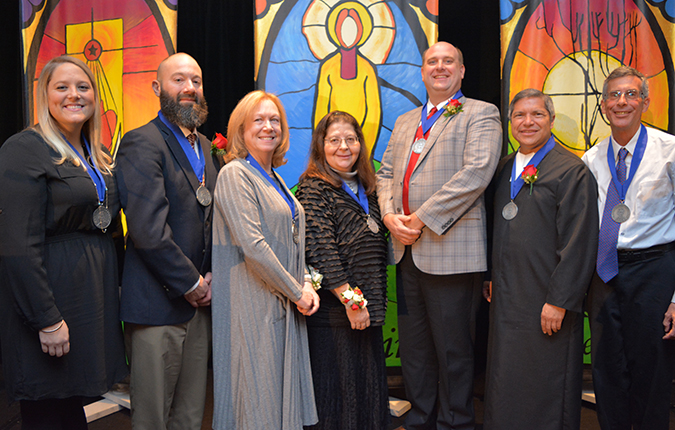 The 43rd annual Huether Lasallian Conference concluded Saturday, November 19 with a Mass and banquet honoring the 2016 Distinguished Lasallian Educators (DLE). The DLEs represent the District of Eastern North America, the Midwest District and the District of San Francisco New Orleans.

“It’s just so exciting and so rewarding, and honestly, it was a complete shock to have been nominated and then to actually have won the award. It was just a complete shock. You always think maybe you’re not necessarily deserving of the award when so many other people have been doing such amazing work in this Lasallian family. So, it’s just been very humbling and very exciting to have won it.”

“I feel it’s a team award. I feel very humbled to accept it on behalf of the team at St. Joe’s.”

“It’s humbling. There are so many wonderful people I work with at La Salle and actually in the Philadelphia area because we have an associative group there. So, I felt humbled by it all because of how many other people I work with. And then when I think of people who have gone before. I don’t do anything alone. I do it with other people. So, it feels a little funny, honestly, to be singled out when so much of what I do is with so many other people.”

“It definitely is an honor. An honor to be recognized for service that I would probably be doing anyway. So, I was really very shocked and surprised when the principal and the president told me that I would be receiving this award. I’m receiving it for everybody – and not just for our faculty and colleagues, but we do so much service. When we have our coat drives, it’s the homeless that are the winners … It’s for our twin school, the Child Discovery Center …. It’s for LifeBlood, for those people who receive life-saving blood. To have all of that recognized, I’m just humbled and honored.”

“It’s very humbling to be honored this way. I think I have been blessed to work with some amazing Lasallians at various schools, so really this is just a recognition of the amazing people I’ve worked with.”

“I was totally taken by surprise when I received the phone call. I guess I had never even ever thought I would qualify for this award. I just go do the daily ministry and I feel that’s rewarding enough, but I’m very honored and feel very blessed to receive this award. I’m very thankful.”

Huether took place for the third consecutive year at the Holiday Inn Chicago Mart Plaza River North. Huether, hosted by Christian Brothers Conference, is an opportunity for educators to not only learn new techniques and find inspiration, it also allows them to interact, share best practices, and grow more deeply committed to their vocation of providing students with transformative, holistic experiences.