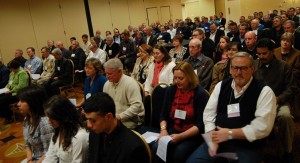 Leadership of Lasallian secondary schools kicked off the annual Lasallian Association of Secondary School Chief Administrators (LASSCA) Conference Sunday, February 24 in Tucson, AZ. The gathering features the theme of Sustainability and Viability: Let’s Accomplish Both! Chief administrators, along with Regional leaders, District leaders and others, will be inspired by engaging speakers, breakout sessions, idea-sharing, and camaraderie. The gathering concludes Wednesday morning.

The Conference began Sunday with a Mass celebrated by the Most Reverend Gerald F. Kicanas, D.D., Bishop of Tucson, and a keynote address by Dr. Gregory T. Kopra, Director of Formation for Mission for the District of San Francisco. The inaugural Bro. Michael Collins, FSC Award was also presented to the band at Christian Brothers High School in Memphis, TN, which is the oldest high school band in the United States. Bro. Michael was serving as President of DeLaSalle High School in Minneapolis, MN, when he died in January 2012 after a brief illness. The award honors his legacy and recognizes excellence in a Lasallian secondary school program exemplifying some of his values, standards and passions.

Check this page and visit Facebook for frequent updates during the LASSCA Conference.