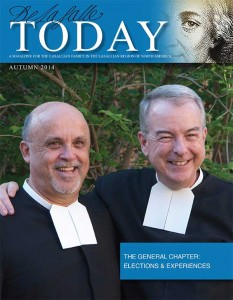 The latest issue of De La Salle Today looks inside the 45th General Chapter – from the election of the third American Superior General to the personal experiences told in the words of the capitulants.

First, the issue highlights the election of Brother Robert Schieler, FSC, as he answered the call to serve as Superior General. We learn how this call was one in a series of calls throughout his life that brought him to this election. Brother Robert also shares a message to our Region.

You’ll get to know Brother Timothy Coldwell, FSC, our new General Councilor, in a Q&A that shares insight into Brother Tim’s thoughts on the mission, association and more. In “A Look Inside the 45th General Chapter,” Brother Tim leads the article with a preview of the direction the Chapter will provide. Then, capitulants share reflections on various aspects of the General Chapter experience.

Click here or on the image above to read an interactive version.