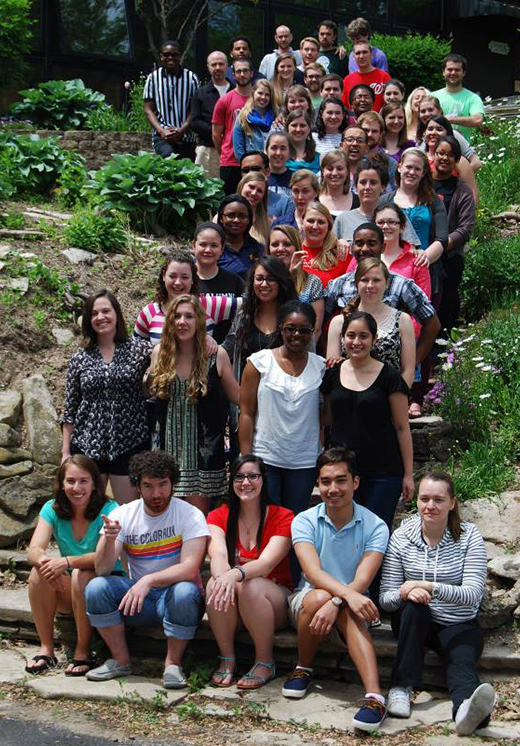 The 2013 – 2014 cohort of Lasallian Volunteers (LVs) met May 22 – 25, 2014, to celebrate and reflect on their year of service. This year, the annual Debriefing Retreat had the theme: Your LV Biblical Experience. Fifty-one LVs gathered at La Salle Manor in Plano, IL, drawing parallels between their journeys and the journeys of a number of biblical characters.

First-year LV Ronald Pollak, who served at Cathedral High School in El Paso, TX, described the retreat as, “a chance to reflect on my entire experience as a Lasallian Volunteer, discern my next steps as a Young Lasallian, and say goodbye to all the wonderful people I shared this vocation with.”

Facilitated by Brother Brian Henderson, FSC, former head of St. Gabriel’s Hall in Philadelphia, PA, who is on sabbatical this year, the retreat consisted of small group breakout sessions, large group activities, segmented sessions based on transitions for exiting LVs and those continuing into a second year, as well as a commissioning ceremony honoring those who have served in the 2013 – 2014 cohort. On Saturday night, retreat participants, families, friends, Brothers, and alums of the program were invited to a social, dinner, and mass to celebrate the end of the year.

“I am honored and blessed to be a part of this Lasallian family,” said first-year LV Molly Allen, who served at DeLaSalle High School in Minneapolis, MN, and will serve a second year. “This weekend was an incredible and memorable time with all of my fellow Lasallian Volunteers.”