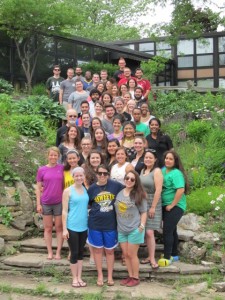 The Lasallian Volunteers (LVs) recently came together for their annual Debriefing Retreat at La Salle Manor from May 26-29, 2016. For more than 10 years, LVs have gathered at the secluded retreat center in Plano, Illinois, to reflect on their year of service and look ahead toward their futures.

“This year’s Debriefing Retreat provided great opportunities for us to sit back and reflect on how far we have come over the past year,” said Julia Turner, a first-year LV serving in Rhode Island. “Some of us lead such demanding lives that often times we don’t take the time to sit and process all that we have been through; the retreat gives us that opportunity.”

Forty-five volunteers gathered to discern this year’s theme: “Your LV Adventure.” The theme was inspired by “A Gospel Adventure,” the Lasallian theme for the 2015-2016 liturgical year.

Scott and Alina Baietti, both LV alums who served from 2008-2010, facilitated the retreat. Other alums, as well as several Christian Brothers, spent the weekend with the volunteers participating in both group and individual activities such as journaling, skits, prayer and socials. Volunteers shared struggles, successes and affirmations during these sessions. 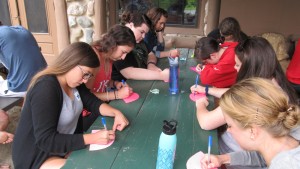 This year also marked a special occasion that took place on the final night of the retreat when the LVs celebrated Brother Dylan Perry, who has served as associate director of the Lasallian Volunteers for the past three years and will step down to continue his journey as a Christian Brother in Tulsa, Oklahoma.

Brother Dylan later reflected, “I was so touched by the great outpouring of support from colleagues, LVs, alumni and more. It was truly humbling and energizing to receive letters of encouragement from so many and to hear stories of the impact that I was blessed to be a part of in my three years as associate director. This program has and will continue to mean so much to me, and I am so proud to be a part of shaping and guiding it.”

On the final day of the retreat, the 2015-2016 cohort came together to commission new LV alums and recognize those who will serve a second year in the program.

“I have never admired a group of people more in my life,” said Dan O’Connell, a second-year volunteer, looking back on his experience. “Personally, having the opportunity to attend LV retreats like Debriefing means being given the chance to spend time with dozens of people working courageously in pursuit of social justice for communities across the country.”