District of Francophone Canada is ‘Full of Hope’ 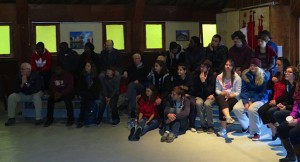 The District of Francophone Canada launched its service year with its annual Lasallian Day September 21. S.E.L. (Lasallian Education Team), a committee that has a Partner as president, organized the gathering at Camp De La Salle in Saint-Alphonse-Rodriguez (Québec), which is slated to close.

The gathering launched the year’s theme, which is Full of Hope, Let’s Launch Out into the Deep, based on an excerpt from the Gospel of Saint Luke.

“Young educators, and administrators of the ministries, as you work with the young, you really rose to the challenge to take that dream of love and hope to them, especially to those who most need it,” Visitor Brother Louis-Paul Lavallée, FSC, told participants. “We all must overcome our individualism and be witnesses of a more fraternal life. Encountering Jesus is possible, namely when we read his message and meditate it; his love becomes visible in our life.”

The convention drew approximately 65 participants, including around 25 Brothers and members of each of the other District ministries: Villa des Jeunes, Centre Notre-Dame de la Rouge and Centre Lasallien Saint-Michel. The majority of participants were Young Lasallians, under the age of 30.