District of San Francisco New Orleans to be Inaugurated July 1 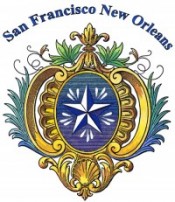 The District of San Francisco New Orleans will provide more information on the new District in the days and weeks ahead.

More on the new District >