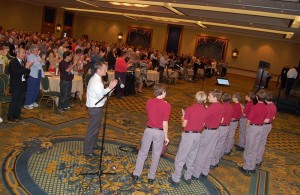 Day two of the Huether Lasallian Conference was jam-packed with presentations and exhibits providing useful tools for educators to bring home to their ministries.

“So far I’m really enjoying the presenters specifically because I like to hear from presenters that aren’t necessarily Lasallian teachers and how what we do in our schools actually really connects with the world in general not just at Lasallian schools but it makes what we do worth it,” said Karen Clements, fifth grade teacher at The San Miguel School of Providence.

After morning prayer, led by students at Christian Brothers School of New Orleans, LA, Dr. Jan Daniel Lancaster, Superintendent of Catholic Schools for the Archdiocese of New Orleans, offered welcoming remarks where she pointed out the importance of the Lasallian mission, what it means to the archdiocese of NOLA, and how it impacts students.

“As I look around our community, the difference that the Lasallian schools have made in the archdiocese is paramount,” she said. “All of you have made the same difference in your dioceses and that needs to celebrated. That needs to be recognized.”