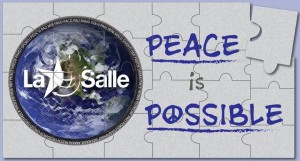 The 7th annual International Lasallian Days for Peace (ILDP) will begin on September 21, 2013, kicking off a month-long celebration ending on October 21, 2013, that will be centered on the theme Peace is Possible. During this time Lasallians around the world are invited to reflect, pray, and commit themselves to the cause of peace.

This year’s ILDP is also dedicated to celebrating the 50th anniversary of the Encyclical Pacem in Terris by John XXIII, the first encyclical that was written not only for Catholics or believers, but also for all people of good will.

The Regional Young Lasallians Committee (RYLC) will be participating in ILDP by providing posts via social media, including historical examples, information about the Encyclical, and prayers. If you use social media, get involved in the online effort by using the following hashtags: #younglasallians #ildp2013. The Lasallian Volunteers (LVs) will also participate by hosting the 3rd annual Daily Expressions of Peace, posting an expression of peace each day of ILDP via social media.

What are you doing to pray for peace? Tell us! E-mail communications@lasallian.info.