In the spirit of celebrating the 150th anniversary of its founding, La Salle University in Philadelphia presented honorary degrees at its May commencement to three Catholic educators who have started or operated schools that offer hope, support, and opportunities for their students in the Lasallian tradition. 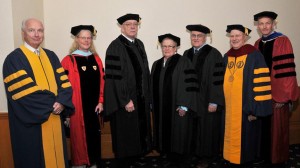 The three recipients were Brother Brian Carty, FSC, founder and President of De La Salle Academy, a private, independent middle school in New York City for economically disadvantaged but academically gifted students; Brother Lawrence Goyette, FSC, founder of the San Miguel School in Providence, RI, an inner-city middle school that has become a model for other schools across the nation; and Sister Jeanne McGowan, SSJ, President of La Salle Academy in Philadelphia, a school for students in grades three through eight whose families would not otherwise be able to afford a Catholic education.

“Each of those being honored has demonstrated the ability to put into practice the philosophy of St. John Baptist de La Salle, our namesake and the patron saint of teachers,” said La Salle University President Brother Michael J. McGinniss, FSC. “As we celebrate the 150th anniversary of our founding, it is fitting we honor those who have contributed to the mission of St. La Salle by continuing his legacy.”