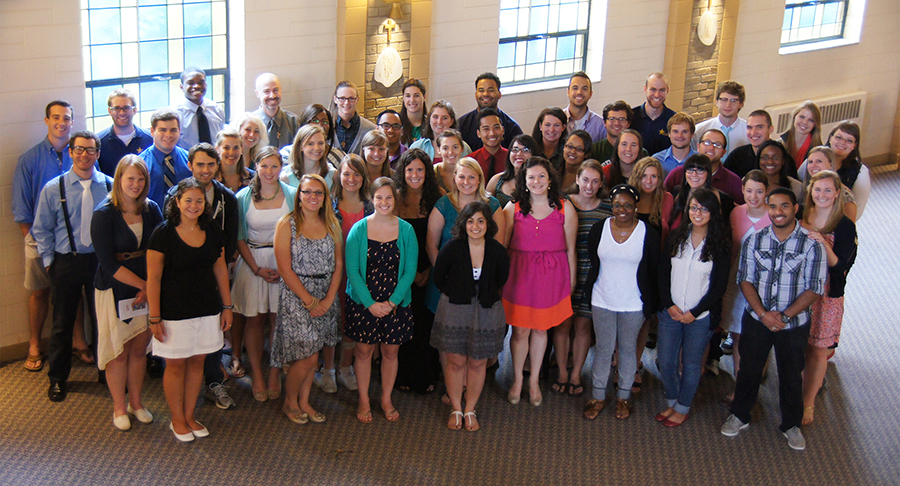 In preparation to embark on a year filled with service and community living, this year’s group of 53 Lasallian Volunteers (LVs) gathered July 21-31, 2013, at Lewis University in Romeoville, IL, kicking off the 25th year of service at LV Orientation.

“This year’s cohort of volunteers were joined by the highest number of alums and Christian Brothers throughout the course of the Orientation, giving them a true taste of community and the history of the LVs,” said Jolleen Wagner, LV Director.

The 25th anniversary celebration of Lasallian Volunteers began with a social gathering during Orientation. The anniversary will be celebrated throughout the coming service year.

Sean Ruane, Lewis graduate and second year LV, said he loved Orientation. “I left orientation feeling re-energized and excited for the year ahead. The sessions were great. Even though I sat through some of the same presentations last year, I learned something new from every single one of them.” Ruane will teach social studies, coach baseball and football, and help with campus ministry at La Salle High School in Yakima, WA.

First year LV Dan Monroe decided to volunteer because of a call from God. “Prior to becoming an LV, let alone not knowing anything about the Lasallian Mission, I was actually in formation to become a priest. While in the seminary I was assigned to be a religion teacher in a Catholic elementary school for my pastoral ministry. I fell in love with teaching and discovered St. John Baptist de La Salle.” Ultimately Monroe decided to leave the seminary and pursue LVs, where he will teach social studies at San Miguel School in Tulsa, OK.

LVs will serve at 27 schools and ministries as teachers, tutors, mentors, social workers, and more. John Paul II Academy in Racine, WI, and Archbishop O’Hara High School in Kansas City, MO, are two new sites that have been added this year.

“I look forward to all the new people I will meet, the relationships I will form, and the experiences I will have,” said Emma Flowers, first year LV who will serve as the Education and Employment Advocate at Operation Breakthrough, an early education child care and social services facility in Kansas City, MO. “Not only does being an LV allow me to develop professionally, but also as a person in so many ways.”