Districts and ministries in the Lasallian Region of North America (RELAN) stand united in denouncing the killing of George Floyd, calling for action and change, and taking steps to make real change happen. 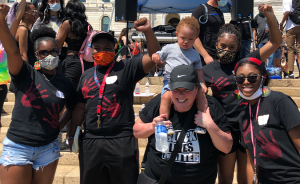 Among the efforts already in process, the District of Eastern North America (DENA) has established a Racial Justice Coalition to guide the District in thought and action and provided a page of resources, a number of colleges and universities have introduced plans for conversation, healing and action, and students and recent graduates of DeLaSalle High School in Minneapolis helped organize a “Sit to Breathe Sit In” at the Minnesota State Capitol. Lasallian Volunteers released a letter, committing themselves to support the fight for justice.

This page includes statements and actions from around the Region. Brother Timothy Coldwell, FSC, General Councilor for RELAN, encourages Lasallians to review the information on this page, writing, “I hope you will be able to spend some time reading the many ‘cries from the heart’ that have emerged in these past days and allow them to join the emotions and passions of your own heart. The societies of our Region include many people and perspectives and yet in that diversity our Lasallian voice offers a unity; it is a prophetic voice that resides in the heart and memory of our Lasallian charism. And this voice echoes Isaiah’s in announcing that ‘Justice will bring about peace.’

Register for the Br. David Darst Center’s virtual mini-retreat, Dig Deep! Racial Justice. The Chicago-based ministry is hosting the retreat to provide space for people to process what is happening and to share ideas, resources and actions for racial justice, both in this moment and for the future. The event will take place online June 20, 10:00 a.m. – 4:00 p.m. with breaks. Learn more and register here. Registration is limited to 90 people. A suggested donation of $50 – $75 per person includes financial support of the partner agencies joining the retreat. Email questions to programs@darstcenter.org.