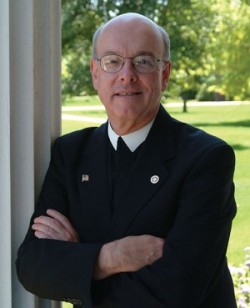 After nearly 30 years of leadership, Brother James Gaffney, FSC, president of Lewis University, announced his retirement plans, which will be effective on June 30, 2016.

“Lewis University has achieved incredible successes through Brother James’ leadership,” said James LaGrippe, chair of Lewis University Board of Trustees in a press release. “His genuine passion, relentless energy and unmatched dedication to students clearly demonstrate our Mission as a Catholic University in the Lasallian tradition.”

Before becoming president, Brother James served on the University’s Board of Trustees for 11 years, including 10 as chair. He also served the former Chicago Province as Visitor, vocation director, and formation director.

Now in his 27th year as president of Lewis, Brother James has led the university during a period of significant growth. Enrollment has increased to nearly 6,800 students, and Lewis has received regional and national recognition for its academic quality. During his tenure, academic offerings have expanded to include more than 80 undergraduate programs, 30 graduate degrees, and doctoral programs in education and nursing. The campus has been transformed through an investment of approximately $250 million in numerous construction and renovation projects.

The Board of Trustees in collaboration with the Lewis University community will start the search process for a new president in 2015.