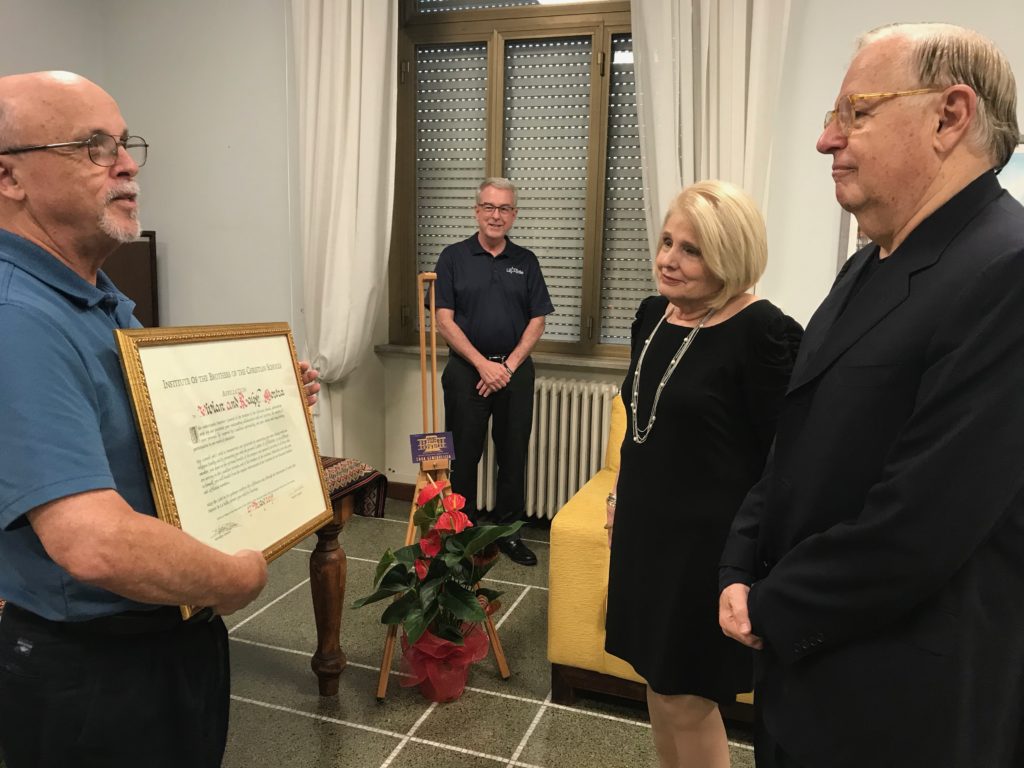 At the request of the Lasallian Region of North America (RELAN), Rafael and Vivian Morera were presented with a Letter of Affiliation by Brother Superior Robert Schieler, FSC, on October 1, 2019, at the Generalate in Rome.

The Moreras’ ties to the Institute of the Brothers of the Christian Schools stem back to Mr. Morera’s early education in Cuba, where he entered the Brothers’ school in Havana, Cuba, at age five. He attended the school through age 14, when the Cuban government shut down the Catholic schools and expelled religious orders from the country. As Mr. Morera recalled, “[I] was literally in the La Salle School attending classes that day when a crowd came in and started ransacking the school and took the Brothers to prison, an experience that cannot be forgotten.”

Soon after, he left Cuba as part of Operation Peter Pan, which brought unaccompanied minors to the United States. At age 17, he took a job next to Saint Patrick’s Cathedral and found a new connection to the Lasallian mission. “It was at St. Patrick’s that God connected me again with La Salle,” he remembered. “There is an altar in the cathedral dedicated to the Founder and it was in those pews in front of the altar that I spent lots of time over my whole life thinking and praying to guide me. I felt that La Salle never left me and continued to be with me during my life.”

The Moreras’ live in Miami, but their support for the Lasallian mission extends into Madagascar, Perú, Rwanda and Cuba. The Moreras have built and improved various Lasallian educational centers: The Center for Girls’ Promotion in Anosibe (Madagascar), classrooms for kindergarten and primary education in Trujillo and Lima (Peru), and the Guadalupana Sisters’ school in Kamazu (Rwanda). They also are supporting various educational activities in Cuba.

“Vivian and Ralph are people of faith, and De La Salle and Lasallian values have shaped their understanding of life and God’s presence in it,” said Brother Timothy Coldwell, FSC, RELAN General Councilor. “Their fervor and zeal inspires us. In extending this affiliation, we are reminded how blessed and proud we are that they carry this mission forward in so many places in the world.”

This affiliation was scheduled to coincide with the Year of Lasallian Vocations, which marks the 300th anniversary of Saint John Baptist de La Salle’s entry into eternal life and celebrates the impact of the mission he started. The 300th anniversary offered a special opportunity to recognize, honor and celebrate these Lasallians whose hearts are on fire for the mission.

Top photo: The Moreras celebrate with the General Council community.