LSU Professor Authors a Book on Women Religious in America 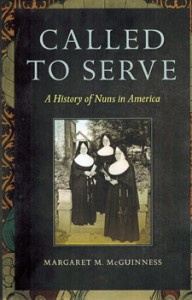 Called to Serve: A History of Nuns in America by Margaret M. McGuinness, Ph.D., professor of religion and Executive Director of Mission Integration at La Salle University in Philadelphia, was recently released by New York University Press. The book examines Catholic women religious throughout American history and is designed to appeal to both undergraduate students and the general reader.

“The story as a whole demonstrates that sisters were indeed important to the story of American Catholicism,” said McGuinness, whose field of study is women in American Catholicism. “Although there were certainly cases of members who were not good teachers or nurses, they contributed to the development of the Catholic Church in the U.S. by their work in education, nursing, and social work. They were, in fact, the face of Catholicism for many Catholics in the U.S. The story intrigued me.”

Called to Serve does not focus on one particular religious community, but rather on collective ministries. McGuinness said the work of these women is an example of how sisters became an integral part of the U.S. Catholic Church. The book ends with a discussion of members of religious communities in the 21st century and the ways in which they have adapted their ministries to meet the needs of contemporary Americans.