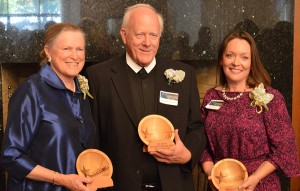 In a celebration that acknowledged the accomplishments of the honorees but also gave life to the history and significance of the program, Lasallian Volunteers (LV) honored three supporters with the 2016 FSC Awards.

The FSC Awards honor Lasallians who have made notable contributions to the program. In this seventh year for the awards, LV honored three Lasallians from the District of San Francisco New Orleans (SFNO) in a ceremony held October 1, 2016, at Saint Mary’s College of California in Moraga, which sponsored the event.

The awards are named in the spirit of three Brothers who embodied the LV values of faith, service and community during their lifetimes. This year’s recipients are: Brother Jonathan Cord, FSC, the Farrell Community Award; Marilyn Paquette, the Bassen Service Award; and Dr. Carole Swain, the Johnston Faith Award.

The Farrell Community Award, named in honor of Brother Michael Farrell, FSC (1940-2009), recognizes supporters who have lived in community with Lasallian Volunteers. Brother Jonathan was honored with this award to celebrate the strong and positive impact he has had on LVs he has lived with in the San Miguel Community in Tucson, Arizona, and the De La Salle Christian Brothers Community in Portland, Oregon. Brother Jonathan is the office manager for the Corporate Work Study Program at San Miguel High School in Tucson, where he has lived and worked since 2009.

“His attention to the little things of community life make it a place of hospitality and formation for the LVs and Brothers,” said Brother James Joost, FSC, Auxiliary Visitor for the District of San Francisco New Orleans, who presented the award to Brother Jonathan.

The Bassen Service Award, named in honor of Brother Christopher Bassen, FSC (1942-2006), recognizes LV alumni who have continued a life of service. Paquette received this award to highlight her continued service to the mission and LV program as board member, site director and mentor. She is principal of De La Salle Academy in Concord, California, a San Miguel model school she helped start in 2014.

Brother Lawrence Goyette, FSC, presented the award to Paquette and praised her longtime dedication to the mission.

“One of her seventh graders in Concord recently said, ‘You have given your life and heart for me all for all my brothers at DLSA. We don’t always say it but we all appreciate what you do for us,’” Brother Lawrence said. “We all appreciate the passion and dedication that Marilyn Paquette puts into her ministry as a Lasallian educator par excellence.”

The Johnston Faith Award, named in honor of Brother John Johnston, FSC (1933-2007), recognizes supporters who have demonstrated great faith in the work of LVs by sharing time, talent or treasure. Swain received this award because of the support she has given to every facet of the LV program, from recruitment to LV Scholars. Swain is vice president for mission at Saint Mary’s College of California and directs the Masters of Arts in Education with an emphasis on Lasallian Students and the Lasallian Educator Fellowship programs.

Karin McClelland, LV 90-92, who presented the award to Swain, said, “Carole has also been one who has understood what a powerful Lasallian formation opportunity the LV program has been to hundreds of participants and found creative ways to keep LVs engaged in the Lasallian Educational Mission after their service.”