The 2013 – 2014 Lasallian Volunteers (LVs) were led on a spiritual and communal Camino from January 17 – 20, in Brant Lake, NY. The Midyear Retreat gathered a group of more than 50 LVs, LV staff, and retreat facilitators for shared time filled with prayer, discernment, affirmation, reflection, and identifying hopes and goals for the second half of their service year.

“Not only was it fun to reconnect with all of the LVs, some I hadn’t seen since Orientation, but it was also a good time to reflect on the first six months,” said Emma Flowers, first-year LV who is currently serving in Kansas City, MO. “Our Camino, or path, for the weekend allowed us to recharge and think about how the rest of our year will look.” 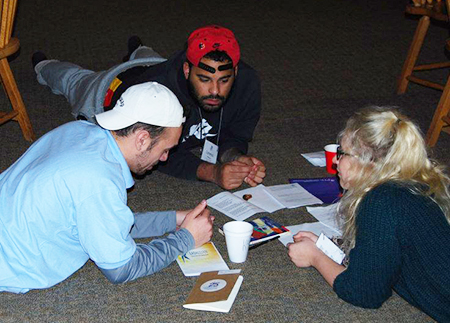 The retreat was led by longtime Lasallians Charles Legendre, AFSC, Director of Lasallian Mission for the District of New Orleans – Santa Fe, and Kevin Regan, teacher at The San Miguel School of Providence, RI. Highlights included reflections in small groups, excerpt readings from Flannery O’Connor, Thomas Merton, Walker Percy, and Dorothy Day, discussions about the readings, and discerning potential paths after a year of service.

The time spent together allows LVs to step away from their service and focus on being, instead of doing. Trey Bradley, second-year LV who is serving in Albany, NY, summarized the weekend by saying, “Great things are done by ordinary people. To get things done we must accept that although the past has happened, our work today is for a better future, expressed in our service.”