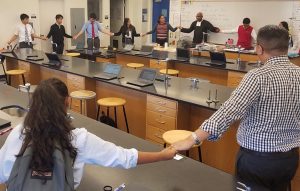 Brother Ghebreyesus uses the symbol of walking hand-in-hand to connect students in RELAN and Lwanga during his 2019 visit to RELAN. Courtesy District of San Francisco New Orleans Communications

The Lwanga District and the Lasallian Region of North America (RELAN) share a special connection through the twinning program. As part of this program, ministries in Lwanga partner with middle and secondary schools in RELAN to encourage connections between students as members of the Lasallian family and provide financial support for Lwanga ministries.

Brother Ghebreyesus Habte, FSC, is completing his service as Lwanga District Visitor, a role he has held since 2014. His commitment to twinning has helped improve communication and strengthen relationships over the years. During his time as Visitor, he visited RELAN three times and introduced the idea of walking hand-in-hand in solidarity during his stops at schools. He invited students and educators to form a circle, hold hands and walk in place, symbolizing solidarity with students and educators in Lwanga.

Brother Betre has a long history with twinning, having been involved in the program while serving at several schools in Ethiopia, including Bisrate Gabriel School in Dire Dawa and St. Joseph School in Nazareth, and welcoming RELAN students visiting Ethiopia when he was Sector Coordinator for the country.

Brother Betre was born in Ethiopia in 1973, took the habit of the Brothers in 1995, and made his final vows in 2005. He holds bachelor’s degrees from Saint Mary’s University of Minnesota and Tangaza College in Nairobi, Kenya. He also holds master’s degrees in educational administration and planning from the Catholic University of Eastern Africa in Nairobi and Lasallian leadership from Saint Mary’s University of Minnesota. Brother Betre is a graduate of the Buttimer Institute of Lasallian Studies, a RELAN formation program, and has participated in International Session for Lasallian Studies (SIEL) in Rome. He has served as a teacher and administrator in several ministries in Lwanga.

Brother Moses, from Naka, Nigeria, has been familiar with twinning over the years and recently helped to bring La Salle Primary in Naka into the twinning program. Brother Moses joined the Brothers in 1995 and made his perpetual vows in 2005. He served as rector of St. Peter’s Seminary in Yola, Nigeria, from 2005 to 2011. He was the first representative of Africa on the International Council of Young Lasallians (ICYL). He holds a bachelor’s degree in education from Saint Mary’s University of Minnesota, a master’s in educational leadership from Christian Brothers University in Memphis, Tennessee, and a doctorate in educational leadership from Lewis University in Romeoville, Illinois.