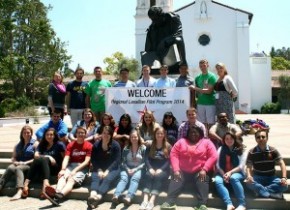 Young Lasallians from all six Lasallian colleges and universities in the United States gathered for the Regional Lasallian Pilot Program (RLPP) held at Saint Mary’s College of California in Moraga from May 27 – June 3, 2014. The weeklong conference included presentations, service projects, and opportunities for building association, which provided an experience that explored what it means to be a Lasallian Leader, build connections with other Lasallians from across the Region, and increase support for college and university aged Young Lasallians.

“My overall reaction to the weeklong conference simply put – I feel blessed,” said Suzanne Denson of Saint Mary’s College of California, class of 2016, who was an event organizer. “We had the opportunity to come together as a community of Young Lasallian college students and share in our Lasallian heritage, grow in our Lasallian formation, and live out our Lasallian mission, together.” 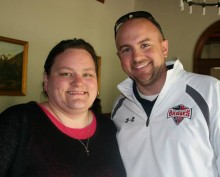 Various Lasallian speakers delivered presentations on important topics related to the mission including identity and animation. Jolleen Wagner, Director of Lasallian Volunteers, chair of the Regional Young Lasallians Committee (RYLC), and a participant at the 3rd International Symposium of Young Lasallians (ISYL) addressed participants. She led a presentation entitled “Lasallian Leadership,” discussing the role of participants as Young Lasallians, the network and what resources exists for them, and how participants will bring back what they’ve learned to their home institutions. Two panel discussions were also held, including one that focused on the Young Lasallian Movement, which involved input from Chris Swain, recently hired Regional Coordinator for Lasallian Vocation Ministry at Christian Brothers Conference, member of the RYLC, and a participant at the 3rd ISYL. A special Lasallian Spirit and College Pride Dinner was held where each school shared what makes their school uniquely Lasallian. The meal included six small courses, one from each school’s part of the country.

“We all come from different places in the United States and uniquely live out our Lasallian mission in different ways,” continued Denson. “This conference gave us the opportunity to have those conversations of how we are uniquely Lasallian.”

Energy for the RLPP originated during the summer of 2013 at the International Lasallian Leadership and Global Understanding Conference at La Salle University, when it was recognized that there was a lack of national gatherings for college and university aged Young Lasallians. A group of American students at this conference decided that many of their peers did not have a good understanding of what it means to be Lasallian nor have ample knowledge about the life of St. John Baptist de La Salle. John Schatz of La Salle University, class of 2015, was part of that group and said that this conference has strengthened his belief in student leadership. “It was created, organized, and carried out by students,” said Schatz. “I plan on bringing back a stronger ability to carry out my ideas at La Salle University.”

Schatz’s ideas include coordinating a retreat for La Salle students on De La Salle’s life. He also hopes to start a newsletter featuring articles from the Lasallian colleges and universities in the United States to help foster community. 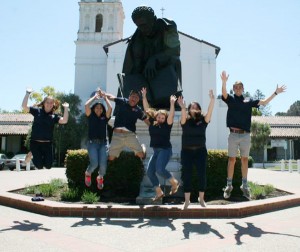 Mitchell Woodrow of Saint Mary’s College of California, class of 2016, who also helped organize the RLPP, said his passion for the mission fueled his drive to develop this conference. “Many people involved in the development of this conference, including myself, see it as a progressive movement towards a better world, and I think it is crucial that college students across the U.S. are more involved in the Lasallian mission,” said Woodrow. “Wherever I go, whether it’s Chicago, New York City, or Rome – all of the places I plan to go to next year – I will find people there, many of them who I know from this conference, that are Lasallians, who I have created lifelong friendships with, that share many of the same values as me, and that love to make a difference in this world. That is what I love so much about the Lasallian mission and family.”[/fusion_builder_column][/fusion_builder_row][/fusion_builder_container]