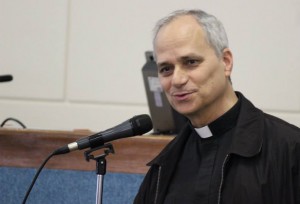 Our retreat, which concluded on Saturday evening, marked the end of the opening week of the General Chapter. In the midst of our days of retreat, Father Robert Prevost quoted from the Acts of the Apostles (2:42-47) saying, “All who believed were together and had all things in common.” It is in our unity – “together and by Association” – that we are strongest. As People of God we are called to live in communion, counteracting today’s zeitgeist, an exaggerated sense of self at the expense of the common good. Father Prevost suggested that our great challenge is to make the spirituality of communion the guiding principle of education. He invites us as Brothers and Lasallians to offer the world today the best elements of our charism – fraternity/sorority and community life.  Quoting from the Vatican II document Lumen Gentium, as Christians we are obligated to relieve the world’s suffering and misery. A commitment to the educational ministry is our path and contribution to this great task.

In his final presentation he proposed for our consideration the Lasallian mission ideas taken from Pope Francis’ Apostolic Exhortation, The Joy of the Gospel. These are: 1) understanding and living out a spirituality that responds to people’s thirst for God; 2) to discover and live a spirituality that offers healing; 3) an apostolic zeal that goes out to the margins of society; and 4) a recommitment to education in ways that integrate fraternity, service, and community.

We have begun week two of the Chapter. This is a week of evaluation, evaluating how the decisions from the last General Chapter in 2007 and the first international Assembly in 2006 have been carried out in different Regions of the Institute. On Monday, the secretariats of the Institute made their reports as part of the evaluation. Brothers Tom Johnson, Vicar General, who is from the Midwest District, and Charles Kitson, Auxiliary Visitor for the District of Eastern North America who recently served as the Institute’s Coordinating Secretary of the Lasallian Family and Association, shared highlights from the Lasallian Family and Association Secretariat. The Secretariat for Solidarity and Development gave a very extensive and impressive presentation on Institute initiatives for direct service to the poor. Brother Craig Franz, a member of this Secretariat from RELAN, highlighted the work of the Institute in the newest nation of South Sudan. This is a collaborative project with 65 other religious congregations from around the world. 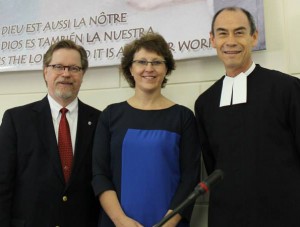 On Tuesday, Dr. Greg Kopra, the principal writer of the report on the 2013 International Mission Assembly and Director of Formation for Mission for the District of San Francisco, addressed the Chapter delegates along with two other members of the Commission that prepared the Assembly, Ms. An de Bremme from Belgium and Bro. Gustavo Rameriz from Mexico.

At the conclusion of their report, Greg and his co-presenters offered five recommendations for consideration by the Chapter delegates. Among these are: 1) call on Regions and Districts to apply the responses to the challenges identified at the assembly in the areas of Lasallian pedagogy, evangelization and pastoral ministry, and the Lasallian Educational Community; 2) create an agency that will assure the follow-up to these actions; and 3) celebrate and appreciate the grace of sharing our mission and opening our association with Partners for the service of the poor. 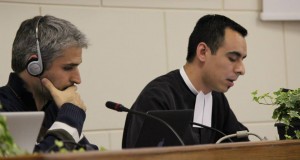 In the afternoon, we heard the report of the International Young Brothers Assembly, which was held in the Philippines in August 2013. Brother Chris Patiño, chairman of the Preparatory Commission for this event and Dean of Discipline/Student Services at San Miguel High School in Tucson, AZ, gave the address. Quoting from their vision statements, Brother Chris said young Brothers want to be “the accelerator of the Lasallian mission and seek new ways of making the Lasallian mission of human and Christian education accessible to and inclusive of the poor, either bring the school to the poor or making our traditional apostolates more accessible (financially and culturally) to them.” Another conviction of the young Brothers is they must “witness the reality of the Gospel and the following of Christ for the service of the young, especially those with most difficulties in creative, visible, and communal ways.” Finally, he highlighted that young Brothers and all of us in this Lasallian mission are on a journey with the poor who are our promised land.

On Wednesday, the General Councilors for the Regions will make their reports to the Chapter delegates. We’ll help delegates become more familiar with each Region by highlighting aspects including how the Regions are structured, what type of formation we offer Lasallians, the challenges we face, and more.

Reporting continues through the remainder of the week with presentations from the General Bursar, Young Lasallians, and the Commission for the Revision of the Rule.