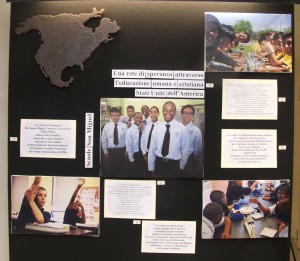 Courtesy Institute of the Brothers of the Christian Schools Communications Service

The San Miguel schools are receiving international attention as part of a new exhibit in the Lasallian library at the Generalate of the Brothers of the Christian Schools in Rome.

The exhibit, called Educating for a World of Brotherhood, focuses on the call to challenge the unjust structures and policies that dehumanize the poor, migrants and youth. The exhibit is a call to reflect on inequalities that today, as in the time of St. John Baptist de La Salle, produce poverty and misery.

The display features one example from each Region of how Lasallians are responding to this call. The San Miguel schools represent the Lasallian Region of North America. The display describes the schools as “a network of hope through a human and Christian education.”

The Generalate unveiled the exhibit May 13, 2016, as part of Founder’s Day festivities. It will be open weekdays until December 31, 2016, for guests of the house, Brothers, people attending conferences and others to see Lasallian works around the world.

The exhibition follows a timeline starting with the death of Louis XIV in 1715. The four other current projects featured are Project Utopia promoting peace in Yopal, Colombia; Lasallians in Balgo highlighting respect for cultures and traditions in Australia; Hagaz Agro Technical School, an agricultural school that is a model of peace between Christians and Muslims in Hagaz, Eritrea; and Casarcobaleno, which gives children a second chance in Naples, Italy.