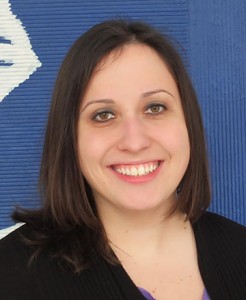 Sarah Laitinen will join Christian Brothers Conference as the director of Lasallian programs August 15, 2016. Laitinen, who currently serves as a teacher at The San Miguel School of Providence in Rhode Island, brings a strong Lasallian background. After graduating from Saint Mary’s University of Minnesota in 2007 with a bachelor’s degree in elementary education, she served for two years as a Lasallian Volunteer (LV) at The San Miguel School of Providence and stayed on staff after completing her time as an LV. She also received her master’s in education from Saint Mary’s College of California.

In 2015, Laitinen was named to the International Council of Young Lasallians. She has taken part in a number of formation programs and Lasallian gatherings, including graduating from the Buttimer Institute of Lasallian Studies in 2012, being a delegate to the 3rd International Symposium of Young Lasallians in Rome in 2014, and participating in the USA-Toronto Region VEGA program in 2010. She has also served in various capacities for initiatives of the District of Eastern North America, such as membership on the Young Lasallians Steering Committee and the Association for Lasallian Mission Committee, and as a delegate to the Mission Assemblies in 2011 and 2015. She is also involved in a number of local Lasallian committees and council, and has presented at a variety of Lasallian gatherings.

“Sarah is a great Lasallian with outstanding skills who brings a tremendous zeal for our mission,” said Mark Freund, executive director for Lasallian Education. “Sarah’s experiences as a Lasallian teacher, a Lasallian Volunteer, and as a graduate of two Lasallian colleges provide her with a great perspective as she takes a leadership position in our formation and program planning.”

“I’ve continually been impressed by the quality of the Christian Brothers Conference programs,” said Laitinen. “I’m looking forward to being a part of them, building community with Lasallians from across the Region, and listening to and sharing stories. This is such an exciting step in my Lasallian journey.”

As director of Lasallian programs, Laitinen will assist the executive director in the creation, planning, execution and evaluation of programs for the Lasallian Region of North America.