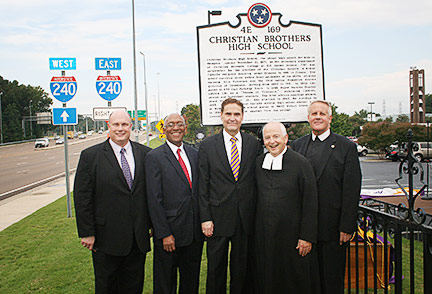 Christian Brothers High School in Memphis, Tennessee, has been honored with a State of Tennessee Historical Commission marker.

The development of the marker was several years in the making sparked by an idea and research of an alumnus. The two-sided marker not only commemorates the school as the oldest high school for boys in Memphis and highlights groundbreaking events that took place there (read the text), it also honors the deep tradition of the band which is the oldest high school band in the United States (read the text).

Tennessee’s Historical Markers Program began in the 1950s; it commemorates the locations of sites, people, and events that are significant in the state’s history.

Crowd gathered for the dedication