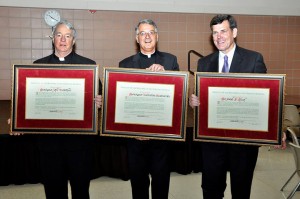 In a stirring ceremony October 29 at Christian Brothers High School in Memphis, TN, three new members were honored with Affiliation to the Institute of the Brothers of the Christian Schools.

The entire student body of Christian Brothers High School packed the gymnasium for the ceremony, which featured the school’s renowned band and chorus. Honored guests included many of the 17 living Affiliated Brothers from the Memphis area.

As the presentation noted, “To affiliate Joe, Msgr. Val, and Msgr. John today is to make them spiritual sons of Saint John Baptist de La Salle, our holy Founder. They are now Brothers, of more than 5,000 Brothers of the Christian Schools found in over 80 countries around the world.”