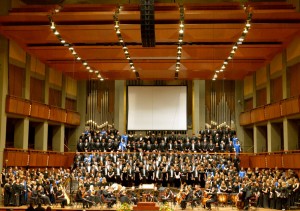 Congratulations to the Totino-Grace High School Concert Choir for an outstanding performance at the Presidents Day Festival Chorus and Orchestra! The 45-member Totino-Grace Concert Choir was one of eight choirs throughout the country selected to perform together at The Kennedy Center in Washington, DC, February 3, 2013.

“I thought the concert was magnificent and moving,” said Dr. William Hudson, President of Totino-Grace.  “I was proud of the students for their performance and the earnestness in which they prepared.”

Under the direction of Mr. Terry Voss, who has been teaching at Totino-Grace for 23 years, the Concert Choir received first place at the 2008 FAME National Choir Competition in New York City. Last October 2012, it was the featured high school choir at the University of Wisconsin-Eau Claire Clearwater Chorale Festival.  Mr. Voss directs seven other ensembles at Totino-Grace who have won other musical awards for the school and have performed at prestigious musical events.  Dr. Hudson attributes the excellent performance of the TG choirs “to the incredible leadership of Terry Voss and the culture he has created. There is both a seriousness and a playfulness in the program that draws kids in and keeps them engaged.”

This year’s Presidents Day Choral Festival pays tribute to the life and service of President John F. Kennedy, commemorating his assassination 50 years ago. The program showcased the world premiere performance of Ethan Wickman’s Let the Word Go Forth, a setting for choir and orchestra of JFK’s most iconic speeches: Inauguration, To the Moon, Crisis of Conscience and Berlin. The composition concludes with a quote from Shakespeare’s Romeo and Juliet by Sen. Robert Kennedy from the eulogy he delivered at his brother’s funeral service:

“When he shall die,
Take him and cut him out in little stars,
And he will make the face of heaven so fine
That all the world will be in love with night,
And pay no worship to the garish sun.” (Act3, Scene2)

Brother Lawrence Humphrey, a member of the Totino-Grace High School Corporate Board and Director for Mission at Saint Mary’s University in Minnesota, was in D.C. for the ACCU (Association of Catholic Colleges and Universities) Conference and felt privileged to be present for the concert. “The Totino-Grace Concert Choir made me feel so proud to be associated with the school,” he explained. “I had a sense that the TG students were representing Lasallian Catholic education in a beautiful way as they raised their voices in remembrance of and in tribute to the life and spirit of President Kennedy.”