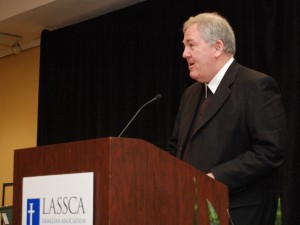 The second day of the LASSCA Conference began with a roundtable discussion for school board leaders during breakfast before a jam-packed day of informative sessions. Brother William Mann, FSC, President of Saint Mary’s University of Minnesota, delivered a keynote speech in which he discussed the challenges of holding and passing on the “Lasallian baton.” The morning and afternoon each featured a variety of breakout sessions on the following topics: teaching using technology, hiring for mission, best practices in tuition assistance, the common core, international students, and healthcare reform.

Day two ended with chief administrators and others gathering as Districts for dinner and socializing. Click here for pictures.