Wildfires burning in Northern California are impacting the Lasallian family in the District of San Francisco New Orleans (SFNO).

Update from SFNO, October 19: Mont La Salle remains undamaged so far. Fire crews are still in the area working on containment. As of yet, there has been no announcement regarding lifting or modifying the area’s evacuation orders. Air quality advisories are in effect for the Napa-Sonoma area. Justin-Siena High School plans to reopen to students on Monday, October 23.

Update from SFNO, October 16: Monday morning reports show that the fire behind the west side of the Mont La Salle property has been contained and largely extinguished. There is no additional information on the fire to the north. As of Monday, Justin-Siena High School still planned to have faculty and staff return on October 17, with students coming back to campus on October 18.

Update from SFNO, October 14: As of Saturday morning, Mont La Salle remained undamaged and less smoke was seen around the property. While some progress has been made with the fires west and north of the property, they continue to pose a serious threat to Mont La Salle. Barring unforeseen circumstances, Justin-Siena High School faculty and staff plan to return to campus on October 17, with the students returning on October 18. A relief fund has been established to help school community members who are in need of assistance.

Update from SFNO, October 13: Precautions are being taken to protect the Mont La Salle property from fire. Also, Justin-Siena High School has established a fund to help school community members who are in need of assistance.

Read the full update and find out how to donate >

Update from SFNO, October 12: Mont La Salle is still undamaged. It is serving as an emergency worker staging area, and its water supply is being used by fire fighters. Justin-Siena High School will remain closed until at least Monday.

Update from SFNO, October 11: “This update from Brother James Joost: ‘At 11:00 A.M. today (PST), with the help of some first hand reports from fire crews in the area, we know that Mont La Salle is still okay. But fire is burning 2 miles to the West and also over the ridge in the North.'”

Original story, October 10: In an update sent at 4:30 p.m. PST on October 10, the District of San Francisco New Orleans (SFNO) announced that the Brothers and staff members were voluntarily evacuated from the District’s Provincialate, Mont La Salle, in Napa, which houses most of the District’s offices and two Brothers’ communities. Shortly after they left, these precautionary evacuations became mandatory as concerns grew over the closest of the fires. The Mont La Salle Brothers are staying in other Brothers’ communities in the Bay Area. The District office is closed until further notice. 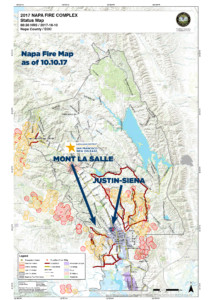 Justin-Siena High School in Napa is closed for the remainder of this week. Resident students and staff have been moved to a hotel. Justin-Siena shared the map graphic on this page, which, as of October 10, shows the proximity of the fires to Justin-Siena and Mont La Salle.

The gathering of the Brother John Johnston Institute of Contemporary Lasallian Practice that was scheduled for the SFNO District at Saint Joseph’s Camp October 12-14 has been canceled. When more information becomes available, it will be posted on Schoology. If you have questions, please contact Sarah Laitinen, 202-529-0047 x109 or slaitinen@cbconf.org, or Mark Freund, 202-529-0047 x102 or mfreund@cbconf.org.

SFNO is posting updates on its website and Facebook. Justin-Siena is providing updates on Facebook. Please keep these members of our Lasallian family, and everyone impacted by these fires, in your prayers.