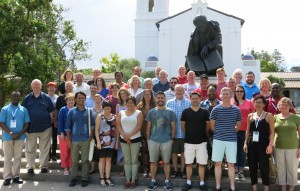 Participants from across the globe gathered for the 2015 Buttimer Institute of Lasallian Studies at Saint Mary’s College in Moraga, California, this summer to further develop their Lasallian formation by deepening their knowledge of Saint John Baptist de La Salle and engaging in community with Brothers and Partners.

“[/fusion_builder_column][fusion_builder_column type=”1_1″ background_position=”left top” background_color=”” border_size=”” border_color=”” border_style=”solid” spacing=”yes” background_image=”” background_repeat=”no-repeat” padding=”” margin_top=”0px” margin_bottom=”0px” class=”” id=”” animation_type=”” animation_speed=”0.3″ animation_direction=”left” hide_on_mobile=”no” center_content=”no” min_height=”none”][The experience at Buttimer] will enable me, as a board governor, to help shape the Lasallian identity of the new Lasallian International School in Kuala Lumpur, Malaysia” said Buttimer III participant Dennis Tang, who is also a member of the board of governors at Saint Joseph’s Institution (SJI) International School in Singapore. “[The most important thing I learned]” Tang continued, “was to touch hearts, and to understand that availability to students is more important than the ability to [just] deliver a lesson.” 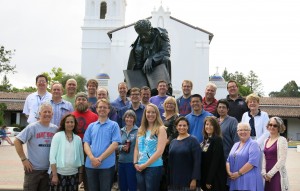 Buttimer, which began in 1984, is an intensive Lasallian formation and education program that studies the life and work of Saint John Baptist de La Salle and the origins of the Lasallian educational mission. Through an examination of the writings of De La Salle and an analysis of some modern educators, participants develop a deeper understanding of the Lasallian heritage and its influence on contemporary education. Participants meet for three, two-week sessions over the course of three summers with each year focused on a different aspect: the founding story, De La Salle’s educational vision, and De La Salle’s spiritual vision.

Mark Freund, recently selected as the next executive director of the Christian Brothers Conference Office for Lasallian Education, and Buttimer III participant, called his experience transformative. “Our group, which was comprised of men and women, Brothers and Partners, and folks from middle schools, secondary schools, higher education, and educational leadership, found common language in a prayerful Lasallian spirit and, as a result, we grew together in faith, in spirit, in cohesiveness, and in true friendship. We were blessed to find each other within the context of the Lasallian tradition and, if I may venture, we each left far richer in spirit than when we arrived on the Saint Mary’s campus in June 2013.” 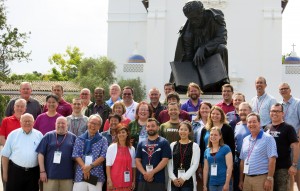 Sue Hines, director of faculty development at Saint Mary’s University of Minnesota, and Buttimer I participant, valued the international presence. “The international participants were able to offer us a view from another lens, which was very interesting. That view is the same, but also has a different nuance to it because of the cultural aspect. Brother Jeffrey (Calligan, FSC) did a wonderful job of honoring the other countries. I walked away from Buttimer with a great feeling that we, as Lasallians, are all in this together. We were there because of the Mission, and it was evident that the zeal among Lasallians reaches around the globe.”

Ninety-seven people attended this summer’s Buttimer Institute from June 28 – July 11. While a majority of participants were from the Lasallian Region of North America (RELAN), other countries represented included Australia, New Zealand, Singapore, Myanmar, Eritrea, Philippines, Congo, Jamaica and Ethiopia. There were 41 participants in Buttimer I, 26 in Buttimer II, and 30 in Buttimer III.