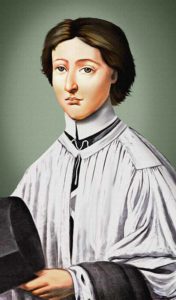 Born into a wealthy family in Reims, France, on April 30, 1651, John Baptist de La Salle decided early in life to become a priest. He was named a canon of Reims Cathedral at age 16. At age 20, his parents died, leaving De La Salle to care for his four younger brothers and two younger sisters. While caring for his siblings, he completed his studies, was ordained a priest on April 9, 1678, and received his doctorate of theology two years later.

A chance encounter with Adrian Nyel, a layman establishing schools for poor boys, set him on a new life path. Instead of continuing his rise in Church hierarchy, De La Salle found himself gradually becoming more involved with Nyel in opening schools for the poor. When Nyel left Reims to open more schools, De La Salle assumed leadership of the “teachers,” who were rough and barely literate men. In 1680, he invited them into his family home for meals, which is considered the founding of the Institute. 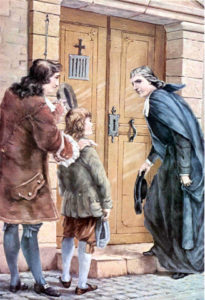 In 1681, De La Salle invited the teachers to live with him. He would eventually move with the teachers to a new house, renounce his Church position, give away his wealth, and form the community that became known as the Institute of the Brothers of the Christian Schools (De La Salle Christian Brothers).

Church authorities resisted this new form of lay religious life, and the educational establishment resented the Brothers’ innovative methods and their insistence on educating people regardless of their ability to pay. 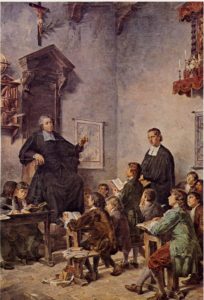 In the early years of the Institute, despite the controversy, De La Salle and his Brothers succeeded in creating a network of schools throughout France that featured the teaching of reading in French (instead of Latin), students grouped according to ability, the integration of religious instruction with secular subjects, and well-prepared teachers with a sense of vocation and mission. De La Salle also pioneered programs for training lay teachers, Sunday classes for working young men, and one of the first institutions in France for delinquent youth. 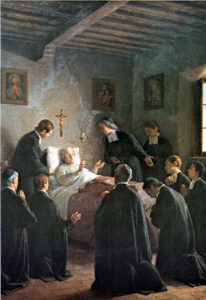 God, De La Salle said, led him “in an imperceptible way and over a long period of time so that one commitment led to another in a way that I did not foresee in the beginning.”