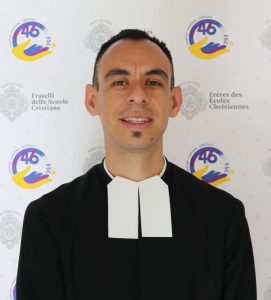 The Leavening Project, a fraternal reflection and invitation by the General Council of the Institute of the Brothers of the Christian Schools, is now available. This latest project invites Lasallians

The Documents of the 46th General Chapter are now available. This latest publication of the Institute of the Brothers of the Christian Schools provides the outcomes of the Chapter, which

Today we brought the Chapter to a close. We began with another photo event in the cool of the morning before moving inside for a few procedural matters and an

In another red letter day for the Institute of the Brothers of the Christian Schools, today we entered the final stage of the Chapter discernment, focusing on the five General

Today the General Chapter completed the voting process for approving the seven pathways that we will follow toward the dream we articulated last week: “We are one Lasallian Family, of

The Great Hall (Aula Magna) was silent and the Brothers were in prayer. “I swear before Jesus Christ, eternal Wisdom, who is my witness, that I, Brother ________, vote for

Today we held a sondage for leadership in the central government. Tomorrow we enter into a retreat guided by Fr. José Cristo Rey García to help us listen at a

The poet Emily Dickinson died on May 15, 1886. Given that tomorrow will be all about our Founder, I will lead with her in today’s reflection. She wrote, “The sailor

One current moving through this Chapter, as in previous Chapters, is that of joining the life of our Institute with the universal Church. Our history as an Institute has by

Yesterday and today we addressed two questions that led us into the third phase: Which conversion process can help us to move forward to achieve the shared dream of the