In another red letter day for the Institute of the Brothers of the Christian Schools, today we entered the final stage of the Chapter discernment, focusing on the five General Councilors who will round out the council. In yesterday’s address, Brother Superior said that the mandate is to actualize one global Lasallian family, that the goal is to look at the unity globally, to help one another work toward a common mission. Change needs to be creative, not just strictly what is outlined in the pathways because they weren’t mentioned. Given our diversity, he said, if we are to move as an Institute we may have to wait for one another. We need to take care of each other. 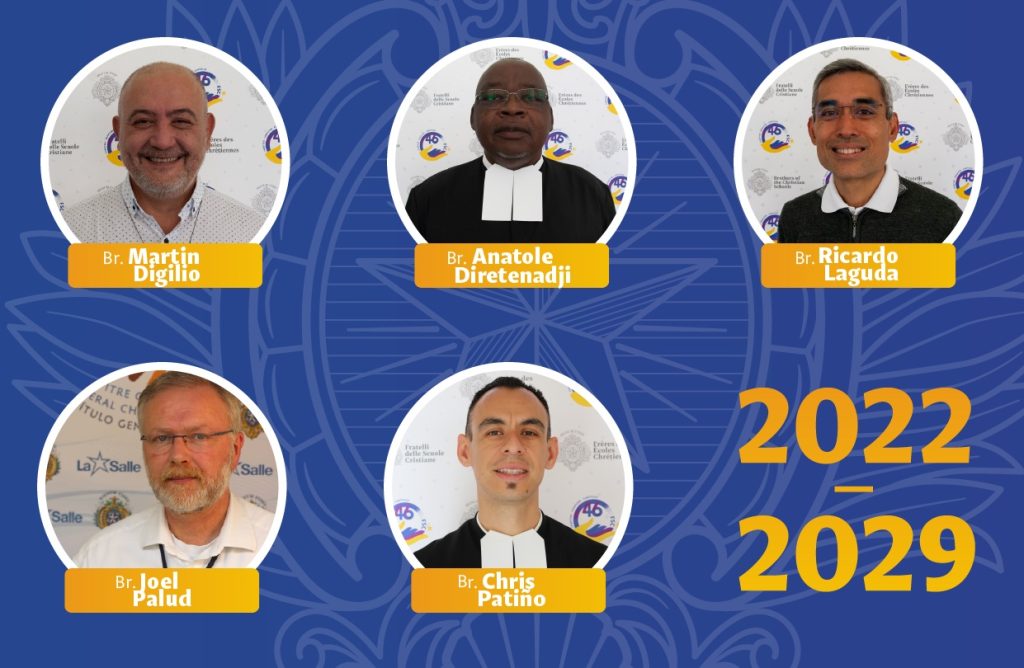 Additionally, he said he would like to see Councilors work together in the Regions, and that each Councilor must see himself as a team player. With this in mind, the capitulants considered potential Councilors in a broader way, seeking to provide the Superior with Brothers who brought collaborative and fraternal skills to fulfill the mandate as well as to form a cohesive community. As each Brother was elected over the course of the four ballots, the expressions of gratitude and joy rose to a crescendo.

Later, we thanked the hard-to-number people behind the scenes who made the Chapter smooth and serene. (Pictured at top) By my count, an even 60—and I don’t dare risk leaving anyone out by listing the roles and responsibilities. Suffice it to say, we were treated like honored guests, and we will leave with threads from the red carpet clinging to our soles.

We also completed a letter that opens, “It is with gratitude and joy that we, the members of the 46th General Chapter, send you our appreciative greetings from Rome. We are happy to share with you the endorsement by the General Chapter of the proposals of the 3rd International Assembly of the Lasallian Educational Mission (AIMEL).”  The amazing work of the first phase of AIMEL gave a special impetus to the Chapter.

There were smiles in every corner, the widest and brightest on the face of the coordinator on the dais, Brother Jorge Sierra, who with the preternatural calm of a matador and invisible red cape kept us safe from the forces that can deprive a Chapter of its life. And so tomorrow we have an audience with Pope Francis to share the reason behind our smiles, some small measure of the spirit and soul of this community God has called, consecrated and sent.