Brother Chris Patiño, FSC, from the District of San Francisco New Orleans (SFNO), is among five Brothers who were elected as General Councilors for the Institute of the Brothers of the Christian Schools on May 20, 2022, at the 46th General Chapter in Rome.

The new General Councilors are (pictured above, from left): 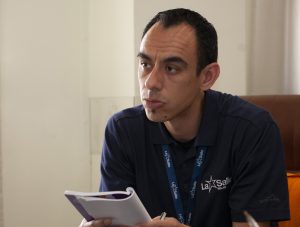 Brother Chris Patiño, FSC, a Brother of the San Francisco New Orleans District (SFNO), is a graduate of Cathedral High School in Los Angeles, California, and holds a bachelor’s degree from the University of Arizona in Tucson and a master’s in Pastoral Studies from Loyola University in Chicago, Illinois. He received the habit of the Brothers in 2007 and pronounced final vows in 2013. Brother Chris began his teaching career at his alma mater, Cathedral High School, and was a member of the founding faculty of San Miguel High School in Tucson, Arizona. He was also instrumental in founding the Lasallians Without Borders initiative of the Districts of SFNO and Mexico Norte. In 2015, Brother Chris was appointed SFNO Director for Vocation Ministry. In this role, he has been an active and influential presence in numerous national religious vocation organizations and events. Watch Brother Chris’ first message to RELAN >

The 46th General Chapter is taking place in Rome, May 1-22, 2022, after having been postponed for one year due to COVID-19. The Chapter includes 70 capitulants from around the world, along with several invited consultants and experts. It assesses the needs of the Institute and global Lasallian family, then seeks creative responses to ensure those needs are met looking toward the future. The three primary Chapter themes are: association for mission; leadership, sustainability and governance; and the life of the Brothers.

Learn more about the General Chapter >