Brother Carlos Gabriel Gómez Restrepo, FSC, from the District of Bogotá, was elected Vicar General for the Institute of the Brothers of the Christian Schools on May 19, 2022, at the 46th General Chapter in Rome. 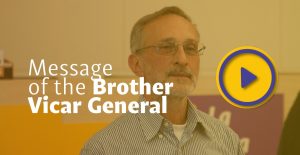 In 2021, Brother Carlos was appointed president of Ethiopian Catholic University in Addis Ababa, Ethiopia, following his service as Visitor of the District of Bogotá since 2016. He served for many years in a variety of higher education roles. Brother Carlos received his Doctor of Education degree in 1999 from Saint Mary’s University of Minnesota. In 2010, Saint Mary’s College of California awarded him an honorary doctoral degree. He also served on the Manhattan College board of trustees (2017-2020).

Read the announcement from the Institute here >

Brother Carlos succeeds Brother Jorge Gallardo de Alba, FSC, a Brother of the Lasallian District of East Asia (LEAD), who served as Vicar General for eight years, following his election at the 45th General Chapter in 2014. He previously served as a General Councilor from 2007-2014.

Brother Carlos will serve with Brother Armin Luistro, FSC, who was elected Superior General on May 18 at the General Chapter. Elections of the General Councilors will take place next.

The General Chapter is taking place in Rome, May 1-22, 2022, after having been postponed for one year due to COVID-19. The Chapter includes 70 capitulants from around the world, along with several invited consultants and experts. It assesses the needs of the Institute and global Lasallian family, then seeks creative responses to ensure those needs are met looking toward the future. The three primary Chapter themes are: association for mission; leadership, sustainability and governance; and the life of the Brothers.