One current moving through this Chapter, as in previous Chapters, is that of joining the life of our Institute with the universal Church. Our history as an Institute has by and large evolved in parallel with the universal Church, toward a more mystical, biblical, sacramental, and Eucharistic image and practice than a devotional, juridical, institutional one. One that is more communal than hierarchical; more embedded in the flux of history than immutable; more engaged in the struggles of its times than standing in judgment over them. Time will tell how we will be influenced by the “synodal path” and Pope Francis’ motu proprio, Praedicate evangelium.

In the meantime, there are now seven working groups, each having taken on the task of building pathways for transformation. I felt lucky to be assigned to my first choice, even if it is Friday the 13th. I should note that Friday the 13th isn’t universally feared. Many countries disregard it. In Greece and some Spanish-speaking countries, Tuesday the 13th is the dreaded day. As for Italy, it’s Friday the 17th that can unsettle some. 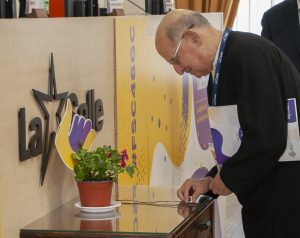 Luckily, this was the first day we didn’t gather in the Great Hall (Aula Magna), as we settled into our groups for focused planning. I think of my group as the “A Team” for a couple of reasons, the leading one the fact that Brother Álvaro, former Superior General, is in and among us. He is a wisdom figure for us, and we trust his insights and draw on his encouragement.

The preceding days have slowly and surely shepherded us to this point. However, even with that solid preparation it hasn’t been easy moving from a dream and a hope to a pathway and a map. Capitulants put in an honest day’s work doing so and will continue into tomorrow. Later tomorrow the various plans will launch, like so many hot air balloons, hoping the winds are favorable and the power lines are few.

Brother Timothy Coldwell, FSC, is General Councilor for the Lasallian Region of North America. He is providing reflections throughout the 46th General Chapter, which are being shared on Lasallian.info and on Facebook and Twitter. Learn more about the General Chapter here and from the Institute of the Brothers of the Christian Schools. Search #FSC46GC on social media for more highlights. Visit the General Councilor’s page for more reflections from Brother Tim >

Top photo from May 11. Photos courtesy Institute of the Brothers of the Christian Schools Communications Service