2015 ILDP: Blessed are the Peacemakers 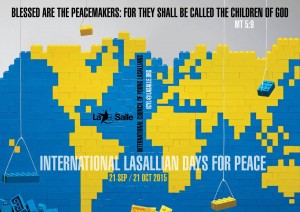 The 2015 International Lasallian Days for Peace (ILDP) will begin on September 21 (the United Nations’ sanctioned International Day of Peace) and run through October 21. The theme for this 9th annual event is Blessed are the peacemakers: for they shall be called the children of God (Matthew 5:9). ILDP is an initiative of the International Council of Young Lasallians (ICYL). The ICYL chose this theme in accordance with the Institute theme for 2015-2016: A Gospel Adventure. Through the monthlong observance, the ICYL encourages activities of reflection, community prayer, study and action.

In choosing this year’s theme the ICYL also paid attention to the theme of the 2013 World Youth Day (WYD) in Poland and Pope Francis’ own message to young people. Since WYD 2013, Pope Francis has identified the beatitudes and Matthew 25 as a blueprint for Christian Discipleship for adolescents and young adults. With all this in mind, the ICYL deems “Blessed are the peacemakers: for they shall be called the children of God. (Matthew 5:9)” to be the beatitude most fitting for this year’s ILDP.

The ICYL will promote ILDP on social media, including Facebook and Twitter. You can get involved in the online effort using these hashtags: #ILDP2015 and #younglasallians. A video resource can be found here. Check back often for more resources and updates.