2016 ILDP: “Our Voices of Mercy are Calling for Peace” 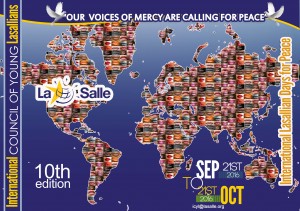 The 2016 International Lasallian Days for Peace (ILDP) began on September 21 (the United Nations’ sanctioned International Day of Peace) and runs through October 21. The theme for this 10th annual event is “Our Voices of Mercy are Calling for Peace.”

ILDP is an initiative of the International Council of Young Lasallians (ICYL). In a letter from Antoine Béland, the international coordinator for Young Lasallians, he explains, “This theme is inspired from the Institute’s annual theme for 2016-2017, ‘One Call, Many Voices’, and from the Jubilee of Mercy declared by Pope Francis. We want to put emphasis on the fact that by showing mercy ourselves and asking for mercy for others, we are building a more peaceful world.”

On October 21, the final day of ILDP, the Regional Council of Young Lasallians (RCYL) is sponsoring a Regional Day of Observance of Peace from 8:00 a.m. EST to 11:00 p.m. EST. The RCYL is inviting members of the Lasallian Family in RELAN to sign up for a 15-minute time slot where Lasallians will come together in praying for peace.

The ICYL will promote ILDP on social media, including Facebook and Twitter. You can get involved in the online effort using the hashtag: #ILDP2016.