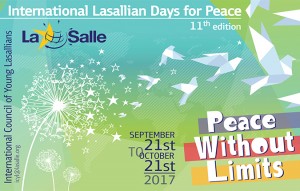 The 2017 International Lasallian Days for Peace (ILDP) will begin on September 21 (the United Nations’ sanctioned International Day of Peace) and will run through October 21. The theme for this 11th annual event is “Peace Without Limits.”

The 2017 ILDP poster was created by De La Salle School in Alimos, near Athens, Greece. It is available in English, French and Spanish, along with a customizable version.

The ICYL will promote ILDP on social media, including Facebook and Twitter. You can get involved in the online effort using the hashtag: #ILDP2017.