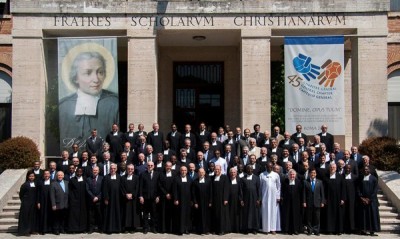 The 45th General Chapter officially came to a close on Saturday, June 7, 2014, ending with a special closing prayer that evening and a Pentecost celebration the next day, following the completion of the Acts of the Chapter and the revision of the Rule.

The Institute provided a live video stream of the address of Superior General Superior General Brother Robert Schieler, FSC, on Saturday, June, 7, 2014, where Brother Robert reflected on the delegates’ time together during the Chapter, stating two emphases mentioned throughout: service to and with the poor and our principal role as catechists. He spoke of the importance of continuing Lasallian formation efforts and Association of Partners and Brothers being a reality today. Also, Brother Robert discussed the work on the revision of the Rule, mentioning that one of the important revisions approved is a three-fold description of the role of the Brothers in the Lasallian Mission shared with Partners focused on: service, witness, and communion. Upon approval by the Holy See, copies of the Rule will be distributed to all the Brothers in the Institute. 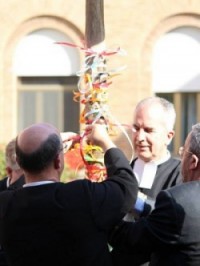 After the closing address and each of the delegates signing the final closing document, a closing prayer ceremony took place, which included an ongoing focus to this year’s 300th anniversary of St. John Baptist de La Salle receiving the letter from the principal Brothers at Parmenie. In prayer, the delegates tied colored ribbons around the Parmenie cross in the garden at the Generalate. Delegates concluded Sunday morning in celebration of the feast of Pentecost.

You can find more information, updates, and links to other resources related to the 45th General Chapter on our website page here >