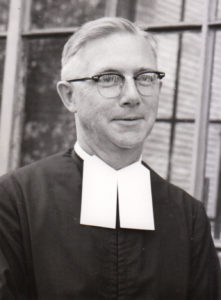 Brother Charles Henry Buttimer, FSC, (1909-1982) was known as a scholar and a skilled leader. He was the first American – and the first non-French Brother – to serve as Superior General of the Brothers of the Christian Schools (1966-1976).

Brother Charles earned a bachelor’s degree from Manhattan College in New York in 1933, and a master’s in 1934 and doctorate of philosophy in 1938, both from The Catholic University of America in Washington, D.C. From 1928-1942, he served in schools as a teacher and administrator before serving in District and Institute leadership. Brother Charles served as Auxiliary Provincial and inspector of high schools for the then-New York District, and became the founding Visitor of the then-Long Island-New England (LI-NE) District in 1956. He went on to serve as Assistant Superior General in Rome where he had responsibility for the Brothers and their ministries in the United States and ministries in the Philippines, Kenya, Ethiopia, Tanzania, Guatemala and Nicaragua. In 1966, at the 39th General Chapter, the Brothers elected Brother Charles as Superior General, a role in which he served for 10 years. During his time as Superior, he assigned American Brothers to found Bethlehem University in 1973, at the request of Pope Paul VI. He also participated in the World Synod of Bishops and received the Cross of the Legion of Honor from the French government in 1976.

Following his service as Superior General, he returned to the LI-NE District, where he offered retreats, addressed groups of religious men and women, and was heavily involved in Lasallian publications, which resulted in the English translation of Saint John Baptist de La Salle’s writings and writings about him.

About the Buttimer Institute >