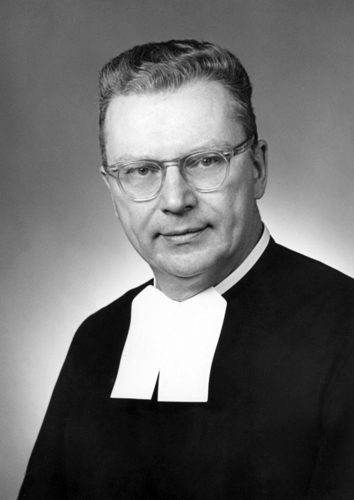 Brother Francis Huether, FSC, (1913-2000) entered the De La Salle Christian Brothers in 1930. He earned his bachelor’s degree in 1936 and master’s in German in 1952 from The Catholic University of America in Washington, D.C. Brother Francis taught and served in administration at several schools in New York and Rhode Island from 1934-1962, before moving into District and Regional leadership. He served as Auxiliary Visitor/director of education for the then-Long Island-New England District from 1962-1968, followed by nearly 30 years of service at Christian Brothers Conference as secretary of education and with Lasallian publications. The publications project spanned three decades and resulted in the English translation of Saint John Baptist de La Salle’s writings and writings about him.

In 1973, under the leadership of Brother Francis, the Regional Education Council of the Christian Brothers in the United States organized a workshop to provide secondary school administrators a forum to address educational concerns. The first gathering consisted of approximately 40 Christian Brothers. When Brother Francis retired from his position as the secretary of education, the annual workshop was given his name. Since that first gathering, the conference has grown and evolved to become an annual event which is the largest gathering of Lasallians in the Region and includes educators from Lasallian colleges and universities, elementary schools, middle schools, childcare agencies, and special ministries for the poor.