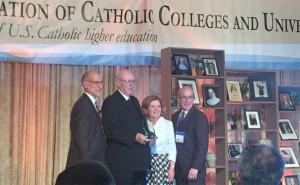 Named in honor of the influential former Notre Dame president, the award is typically given to a prior college president who has made outstanding contributions to Catholic higher education through service and academic work.

“Being a Catholic college President is one of the most complex and challenging roles in our nation. To succeed takes a true team effort and my most critical ability was to say ‘I need your help.’ And I was gratified, both at Bethlehem University and at Manhattan College, by the extremely positive response of so many talented individuals,” remarked Brother Thomas upon receiving the award.

Brother Thomas was honored Saturday, January 30, 2016, as part of the ACCU’s annual meeting, which was held in Washington, DC.