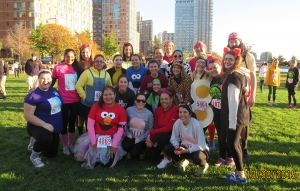 On October 31, 38 Lasallian Volunteers (LVs), two parents of LVs, four Brothers and 15 family & friends participated in the 10th annual LVs Run at Firefighter’s Field on Roosevelt Island, in New York City. This event raised over $70,000, and donations are still being received.

In 2005, Lasallian Volunteer Adriana Rodriguez ran the New York City Marathon and the tradition began. Over the past ten years, countless numbers of Lasallian Volunteers have participated in LVs Run and have raised hundreds of thousands of dollars to support their experience as LVs and the ministries they serve.

Reflecting on her experience, current LV Bridget Kennedy wrote, “Thirty-eight LVs spent the weekend at the Bedford Park community in the Bronx. We ran together and cheered each other on. We shared meals together. We strengthened our family. Yes, we 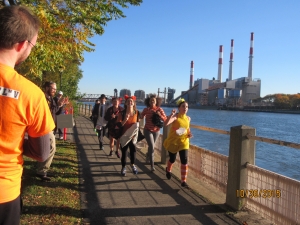 call it the LVs Run weekend, but it is much more than that. It is a time to reconnect with your fellow LVs and learn about their experience so far. It is a time to meet alumni and discover why they served as LVs in the past. It is a time to travel to a new place (for some LVs, it was their first time in NYC). It is a weekend filled with faith, service and community.”

In addition to the actual run, on Saturday afternoon the participants spent time together at a post-race luncheon at Serviam Gardens, an LV ministry, and then attended Mass together at St. Philip of Neri, both in the Bronx. The 2015 committee was comprised of: Bridget Kennedy, Dan O’Connell, Dan Bowers, Matt Billings, Liz DiPlacido, and David Anderson.