The Lasallian Education Network expanded February 19 as Archbishop Rummel High School in Metairie, LA, was officially re-associated as a Lasallian school. Brother Tim Coldwell, FSC, Visitor of the New Orleans-Santa Fe District and Rummel alumnus, presented the certificate of re-association to Brother Gale Condit, FSC, president, and Michael Scalco, principal, as part of a Lenten Mass. This was the final step in the process of re-association between Rummel and the Institute of the Brothers of the Christian Schools.

The De La Salle Brothers founded Rummel in 1962 and administered the school until the early 1990s. In the late 2000s, the school initiated the re-association process. 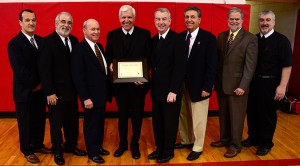 The re-association ceremony included several reflections and readings from St. John Baptist de La Salle along with comments from Dr. Jan Lancaster, superintendent of Catholic schools for the Archdiocese of New Orleans, about the Brothers’ long-standing worldwide influence and their close association with Rummel.