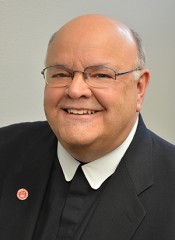 Brother Larry Humphrey, FSC, has been named the new president of St. Joseph’s Institution (SJI) International School in Singapore. Brother Larry succeeds Brother George Van Grieken, FSC, of the former District of San Francisco, who served as president of the school for two years and returned home in June.

In an effort to push to continue to be “Brothers Without Borders,” a prominent theme from the 45th General Chapter, Brother Larry will make the move from Winona, MN, to Singapore on July 11. His most recent role was at Saint Mary’s University of Minnesota in Winona where he served as the university’s director of mission.

Today there are 12 Brothers in two communities and seven Lasallian schools in Singapore, a sector of the Lasallian East Asia District (LEAD), but the De La Salle Christian Brothers have been present since 1852. SJI International School was founded in 2007 and now serves more than 1,400 students at the elementary and high school levels.