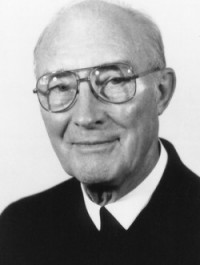 Brother Basil Rothweiler, FSC, former president of Saint Mary’s University (then College) of Minnesota, died at the age of 97 on November 8 in St. Paul, MN. Brother Basil served as Saint Mary’s 7th president from 1956-1963 and celebrated his 80th Jubilee in July 2014. He also served in many other leadership positions throughout his lifetime, including Visitor of the District of St. Paul – Minneapolis, from 1963-1969.